Sai Ganagoni is a sophomore at Emory University studying Economics with a minor in Global Health. On campus, he is involved with No Strings Attached, Emory's oldest male a capella group, the American Mock World Health Organization, Alpha Kappa Psi's Professional Business Fraternity, and Universities Allied for Essential Medicine.

Sai hopes to pursue public health law in the future to change the way healthcare is approached in the United States. Sai is committed to fighting the current policies against climate change put in place by the US administration and is excited to work with the Put a Price On It campaign as a part of that effort.

Whether it’s record-breaking heat waves or unexpected monsoons, the earth is heating up, and it’s our fault. We all know that the increasing of the earth’s climate would have possibly devastating repercussions for our future and our environment. It’s understood that global warming will have adverse effects on humanity, but how exactly will it affect us?

The fact is that rising temperatures that create severe weather including floods, droughts, and rising sea levels are already affecting human health (Balbus). For centuries, people across the globe have relied on their environment and weather to provide them with a system of living in which the people make the best use of the resources. As the climate and weather change, countless facets of human health are affected because of the direct impact on the environment.

There are two ways in which the changing climate can affect people. The first is by exacerbating the current issues that already exist in a nation (Balbus). Take for example people suffering the fate of extreme heat in a low-resource and remote area where food and water quality are already below average; the circumstances only worsen. Given the context of developing countries in which the quality of life is already poor, looming weather disaster only serve to compound the current health issues that the country faces. The difficulties that people face accessing food, water, and shelter will not only increase, but could cripple entire countries with poor policy infrastructures.

The second way is when severe weather or climate creates new problems to an area that has not encountered them before (Balbus). An area that has experienced consistent rainfall and relies on it for its crops could be devastated if a drought suddenly dried up its fields and prevented easy access to water. These effects are much clearer to see and they are more easily attributable to the change in weather but cause health problems much quicker. 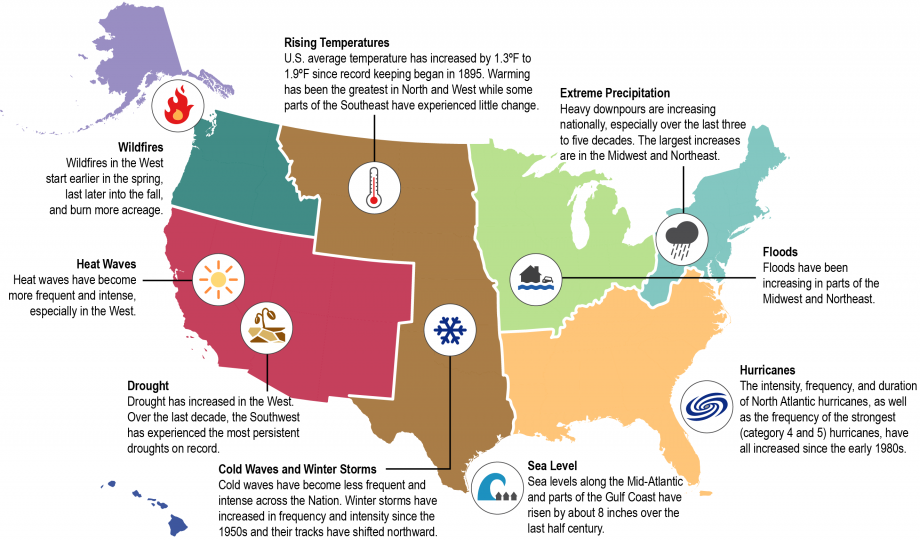 When the issue of climate change is framed as an immediate threat, it’s clear that there will be a significant effect to global health; but just how big could that impact be? It is entirely possible that “climate change will exacerbate the approximately 12.6 million deaths each year that are caused by avoidable environmental risk factors” (World Health Organization). The direct impact of climate change is expected “to cause an additional 250,000 deaths per year, from malnutrition, malaria, diarrhea, and heat stress” (World Health Organization). If nothing changes about the way that we as humans act and live, then preventable deaths will continue to persist in vain.

Our current trajectory leads us to face inevitable vulnerability, where the changing weather could lead people to become more sensitive to illness and could cause a much difficult time recovering from one. Unpredictable and unprecedented weather acts as a stressor for many chronic illnesses and diseases such as diabetes, asthma, alzheimer’s, and obesity (Balbus). There is no easy solution to cope with these possible health outcomes, which would further complicate the dismal healthcare system in the United States.

The dialogue surrounding climate change often addresses long-term effects that climate change could possibly have many hundreds of year into the future, with the melting of the polar ice caps and the endangerment of arctic animals. Climate change is viewed as an issue that will cause severe problems in someone else’s lifetime, but not our own. This is a deadly misconception that must be dispelled to prevent complacency with our current state.

Climate change not only poses a threat to our distant future, but also to our imminent future health. If you haven’t been involved yet, make an effort for yourself and your future self, to rally your local representatives in favor of a policy that acts against climate change instead of ignoring it.